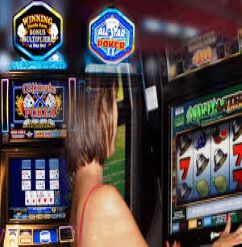 If you love playing slots, then the chances are you'll enjoy video poker. The game has all the high paced appeal of slots, with an added element of skill. This gives players an increased level of control over proceedings, meaning you aren't simply at the mercy of the odds.

If you'd like to give video poker a go, a good first step is understanding the different types of video poker available. Here we will run through the main variations of the game, to help you get started.

What is Video Poker?

Based on the classic game of 5-card draw players are initially dealt five cards at random. Players can then choose to hold or discard any/all of the cards in their hand. Any discarded cards are replaced with new cards, as players attempt to accumulate a hand that matches one on the game's paytable.

Most types of video poker you will come across are based on one of two games. These are Jacks or Better & Deuces Wild.

One of the original types of video poker, Jacks or Better is named after the lowest paying winning hand - a pair of Jacks. The paytable for this variant includes the royal flush, straight flush, four of a kind, full house, flush, straight, three of a kind, two pairs, and a high pair of jacks or better.

One of the reasons for its enduring popularity is its relatively high payout percentage. Even with a basic strategy, players can expect to receive a payout of around 99.5%.

A variation more closely resembling slots, Deuces Wild has become the most popular version of video poker. Whereas every card has a fixed value in Jacks or Better - except for the ace, which can count as the highest or lowest card in a straight or flush - there is more flexibility in Deuces Wild.

In this type of video poker, each deuce (2) can count as any number, making the possible number of winning combinations far greater. For example, if you have a hand containing four 3s and a 2 you can win by changing your 2 into an additional 3 - therefore creating a four of a kind winning hand. This also means there are two high paying hands, the royal flush and four deuces.

A variation on Deuces Wild, this game introduces two joker cards during gameplay. In this type of video poker, the jokers take on the role of wilds.

Another difference between this and Deuces Wild, is that the lowest paying hand in two kings - as opposed to four of a kind. With Deuces Wild being so popular, this type of video poker is far less commonly offered by casino operators.